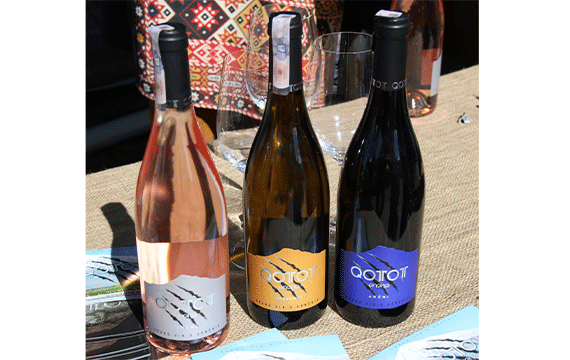 “New Wine Company” has  restocked its range of  authorial wines of Didier Cornillon,  the French oenologist from the Rhone Valley. Wines under the Qotot brand are produced in the Areni region from two main  indigenous varieties of Armenia – Areni Noir and Voskehat.
The Qotot project was found by the oenologist Didier Cornillon and his two Armenian partners to uncover the potential of  indigenous grapes from the Vayots Dzor region.  Keeping singularity  inherent in Armenian wines from grapes on their roots, Didier gives an opportunity to look at them in a new way in the style of southern France.
“My  introduction with the winemaking of Armenia started with a fluke ,” says Didier Cornillon. “On Discovery Channel, I saw a story about the world’s oldest winery, found in the cave of Areni. After that I decided that I should see it with my own eyes and,  coming to Armenia, was impressed by the terroir of Vayots Dzor, its vineyards on their roots. ”
Didier Cornillon started his work in Armenia as a consultant enologist inHin Areni. On this modern winery, located directly in the village of Areni near the vineyard, Didier now produces his own authorial  wines. Here there is all the necessary equipment for working with grapes in French stylistics – modern crushers and presses for soft pressing of pulp, temperature control systems, stainless steel tanks. For reserve red wines, it is planned to use French oak.
The project works with grapes, which is purchased in the Vayots Dzor region, on the farm of Hin Areni. Vineyards are located  about 1,200 meters above sea level on two plateaus above the valley of the Arpa River. The soil in the vineyards is poor, stony, with a high proportion of limestone, with the presence of volcanic rocks.
The vineyard is laid by modern canons with a density of planting about 3 thousand bushes per hectare. Yields are maintained at a level of no more than 70 hwt / ha for red varieties and not more than 90 hwt / ha for white varieties. The average age of the vines is about 10 years. The project works with two main  in grape varieties – Areni Noir and Voskehat. The age of the vines  from 9 to 12 years.
In the assortment of Qotot brand three wines: red and pink from Areni  Black and white from Voskehat. Stylistics of the project  reminds the wines of southern France. All samples (including pink wine) have a density, complexity, richness of flavor and taste. At the same time, the wines are perfectly balanced – there is not a hint of gravity in the taste. All Qotot samples are interesting both  on its own and in various gastronomic combinations.
The sommelier of Moscow and St. Petersburg could already be convinced of this at the events held in two capitals by the Head of the Sommelier Union and experts of Russia Arthur Sarkisyan.

Armenians wines from NWC portfolio have made a furor at the tasting contest in Krasnodar.